Skip to content
Date: October 16, 2018Author: LFBooks 1 Comment
LF: Tell us about your self.
KW: Let’s see.
–Basic biographical: I’ve lived on both coasts, but have now been in Indiana for close to 30 years. (Short version: met husband in California, moved here with him. Cute fact: met him at an ACLU singles picnic on July 4th.) We have two immensely creative, fascinating, and truly nice daughters, and a sweet but neurotic dog. I’m an appellate attorney (which means I handle appeals of judgments, mainly in civil cases) (which are cases that don’t involve criminal charges). I’ve been a professional photographer at times, but not currently.
–Reading habits: I’ve been reading all sorts of fiction all my life, with the largest chunks probably science fiction and “classic” British fiction of the 18th and 19th centuries. I also read some history, science history, popular science, popular psychology (e.g. re sleep, memory) and biography. I read whenever I’m not doing something else, and often while I am. I reread when I particularly need to unwind, or when I can’t decide which book to start.
–Writing history and habits: I’ve wanted to write novels since I was 10 years old, if not earlier. I wrote something I considered a novel at that age, as a gift for a beloved teacher. It was 200 handwritten pages, with 100 two-paged chapters. Its primary characters were a boy and a dragon, the latter assuming a bewildering variety of roles in the story. My mother, a saint among women, TYPED the whole thing and put it in a binder so I would feel “published.” I tried another novel at age 14 and abandoned it after around 40 pages. I then turned my hand to poetry, with mixed results. When a graduate assistant managed to deflate my struggling artistic ego in a short story writing class in college, I gave up altogether for decades. However, before my older daughter was born, I started writing manuscripts for picture books. Fast-forward 17 years, and that daughter tried National Novel Writing Month. She did it again, and I decided to try it myself. The rest is, if not exactly history, nine novels including my new SF release Water to Water. 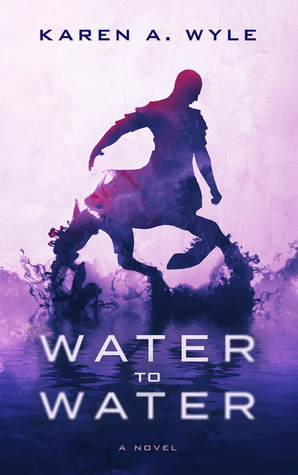 LF: You have a few books under your belt, could you tell us about them?
KW: Water to Water is my ninth novel (not counting the juvenile efforts). Four are SF of the aliens-on-other-planets variety; three of those involve human-alien interaction. (Water to Water doesn’t.) Four are near-future with some arguably dystopian elements. One is an afterlife fantasy with family drama, mystery, and romance mixed in. (Genre? What’s that?…)
I’ve written one nonfiction book. Closest to the Fire: A Writer’s Guide to Law and Lawyers attempts to sum up American law (just SLIGHTLY ambitious of me) for the benefit of (a) authors and (b) anyone who wants to better understand the American legal landscape. It includes a number of story ideas based on legal rules and principles — most of which have nothing to do with the well-trodden paths of homicide investigations and trials.
LF: In Water to Water, life and death plays an important role in the story, what made you make that a key point to the story?
KW: Now that you ask, my previous books suggest an abiding interest in how life and death affect each other and how the living cope with their own and their loved ones’ mortality. (In my Twin-Bred series, a womb twin survivor — someone whose twin died in utero — copes by keeping her twin alive in her mind as a companion and collaborator. Wander Home is set in an afterlife whose features are well suited to working through unfinished life business.) But I’m sure my father’s death last year brought the issue even more to mind. It can’t be a coincidence that the story starts with, and turns on, a son accompanying a father to the father’s funeral.
LF: How hard do you think it is, to get yourself out there and meeting new readers?
KW: I live in a nameless bit of a county near a small city, which means I do most of my outreach online. I do try to find non-obnoxious ways to mention my books, or at least the fact that I write them, in book groups and when meeting new people.
LF: What are you currently working on?
KW: After I finished the rough draft of Water to Water during 2017’s National Novel Writing Month (aka NaNo), I felt like continuing to write, so I started another rough draft. I got near the end of December and realized I had taken an undesirable shortcut, avoiding the most emotionally charged and interesting aspects of the story. I put the incomplete draft aside until this past summer, when I did some more work on it. I expect to return to it this coming December after this year’s NaNo.
I have several competing ideas for NaNo, and need to somehow make time to ponder them and pick one.
LF: Anything you would like to add?
KW: I’m always happy to run on about NaNo or about self-publishing (and about how not to get sucked in by or suckered by the various predatory outfits that claim to publish unknown authors or assist authors in self-publishing). If anyone wants to get in touch with questions on those subjects, please do!

One thought on “Interview with Karen A. Wyle”