How Does the Hair Fall Again? – On Describing Characters

Thanks Laura for letting me drop by your lovely blog as part of the tour!

Maybe. But I’ve read enough of it to be done with hearing about how hair falls.

We’re talking about describing characters today. For those who write fiction, I believe exchanging philosophies and approaches to writing is a helpful habit. For those who enjoy reading fiction, seeing different authors’ approaches can be amusing and enlightening.

So let’s jump into this question: what is my philosophy on describing characters?

My approach is rather simple. When it comes to physical descriptions, I believe that over describing is a far greater crime than not describing enough. Long blocks of descriptive paragraphs can constipate your story—they make it boring, uncomfortable, and something that people just want to be done and over with. Not describing ‘enough’ allows the reader to fill in gaps with their imagination and create the characters that they want to see. I find that my readers’ imaginations are more than up for the challenge. 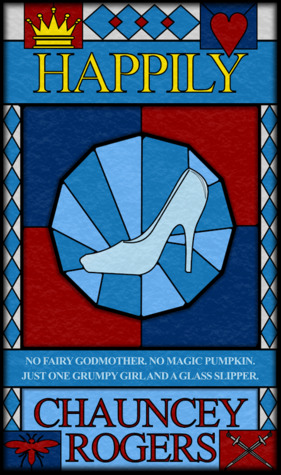 Ultimately, though, I believe that characters are best described in the things that they say and do, not the length or color of their hair, shade of their skin, or shape of their eyes. People look how they look, but it’s their actions that define who they are. I try to apply that to my writing as well.

Now let’s have some fun in the comments, shall we? We’ll play a game!

Here’s the game: I never once described the character Laure’s face or body. In an earlier draft, she mentioned her height, but that was edited out. So, if you’re already read Happily, describe Laure physically—describe her as you saw her in your mind. We can all see how similar/different our individual versions of Laure are!

And if you haven’t read Happily yet, you can still play along. Just give a physical description of a sassy teenage thief.

Thank you Chauncey for taking the time!

15 thoughts on “How Does the Hair Fall Again? By Chauncey Rogers”